Twenty-two year ago I wrote the book Friday Night Lights. I thought that is where the story ended. But it is actually where it began in the bond I formed with the key character of the book, running back Boobie Miles. For all of those twenty-two years we have forgotten each other.

At first we were friends. Now we are family, an unlikely pairing given my roots of privilege in Manhattan and his roots of poverty in Texas. Since he played football at Permian High School in Odessa, Texas, Boobie’s life has been a terrible struggle. I witnessed what happened at Permian, how he was treated as a football animal incapable of learning, and also subjected to brutal racism once he hurt his knee and could no longer play. When you are treated like that, you don’t have a chance.

After Friday Night Lights is our story, honest, unexpurgated, but ultimately one of inspiration and finding love in the unlikeliest of settings.

“Years after encountering a compelling character we often ask ourselves the ‘what ever become of’ question. In the case of Boobie Miles, Buzz Bissinger never let the story go and here he answers our questions as only he can.” 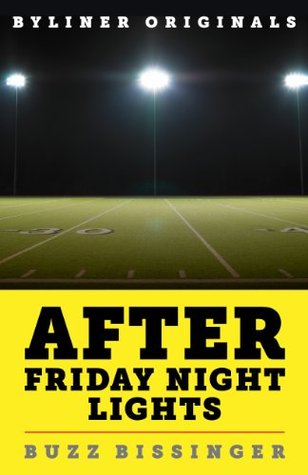